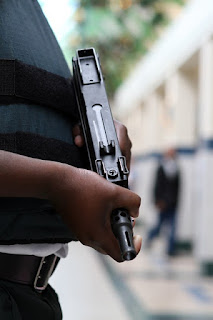 
PETALING JAYA: Retired armed forces personnel could serve as guards in schools to help address bullying, drug peddling, smo­king and other social woes.
Viper Force Sdn Bhd chief executive officer Mohd Rashid Musa said they had discussed with the Education Ministry on the possibility of engaging the veterans to help guard the schools apart from helping secure the peri­meters against negative influences.
“Now that we have an arrangement with PVTTB (Non-Pensionable Armed Forces Veterans Malaysia), we have a ready pool of resources who are willing to serve as guards.
“And they are no ordinary guards who basically focus on guarding physical settings. They are highly trained personnel who are capable of providing overall security inclu­ding feeding information to the relevant authorities to facilitate swift action,” he said.
Viper Force and PVTTB are expected to endorse a Memorandum of Understanding (MoU) today that will enable the company to tap into the vast pool of ex-servicemen to provide armed guard services.
Recently, Deputy Prime Minister Datuk Seri Dr Ahmad Zahid Hamidi had rejected a proposal by the Education Ministry to utilise Rela members to help maintain security in schools.
Rela personnel must first be absorbed as manpower of security companies before they could serve as security guards, he said.
Mohd Rashid said having highly trained guards would be beneficial to the clients and the public, as they could also handle multiple threat risks.
“Security guards should not be regarded as second-class workers, as their job is important in helping ensure security and safety.
“Security guards can be the eyes and ears to help authorities address criminal threats in the neighbourhood and workplace,” he added.
Mohd Rashid said Viper currently provided security services for banks, warehouses and condominiums among others besides full protection services for VIPs.
“The door is now open for us to obtain a constant supply of guards from the pool of non-pensionable armed forces veterans,” he said.
Mohd Rashid said the association had an impressive pool of ex-servicemen aged between 30 and 40 whose skills and services could be utilised for the benefit of society and the nation.
“People should be willing to pay more for quality service. Security should never be compromised,” he said.
Previously, security companies had em­­ployed ex-servicemen on an ad hoc basis
Lontaran Idea oleh Nizam Yunus